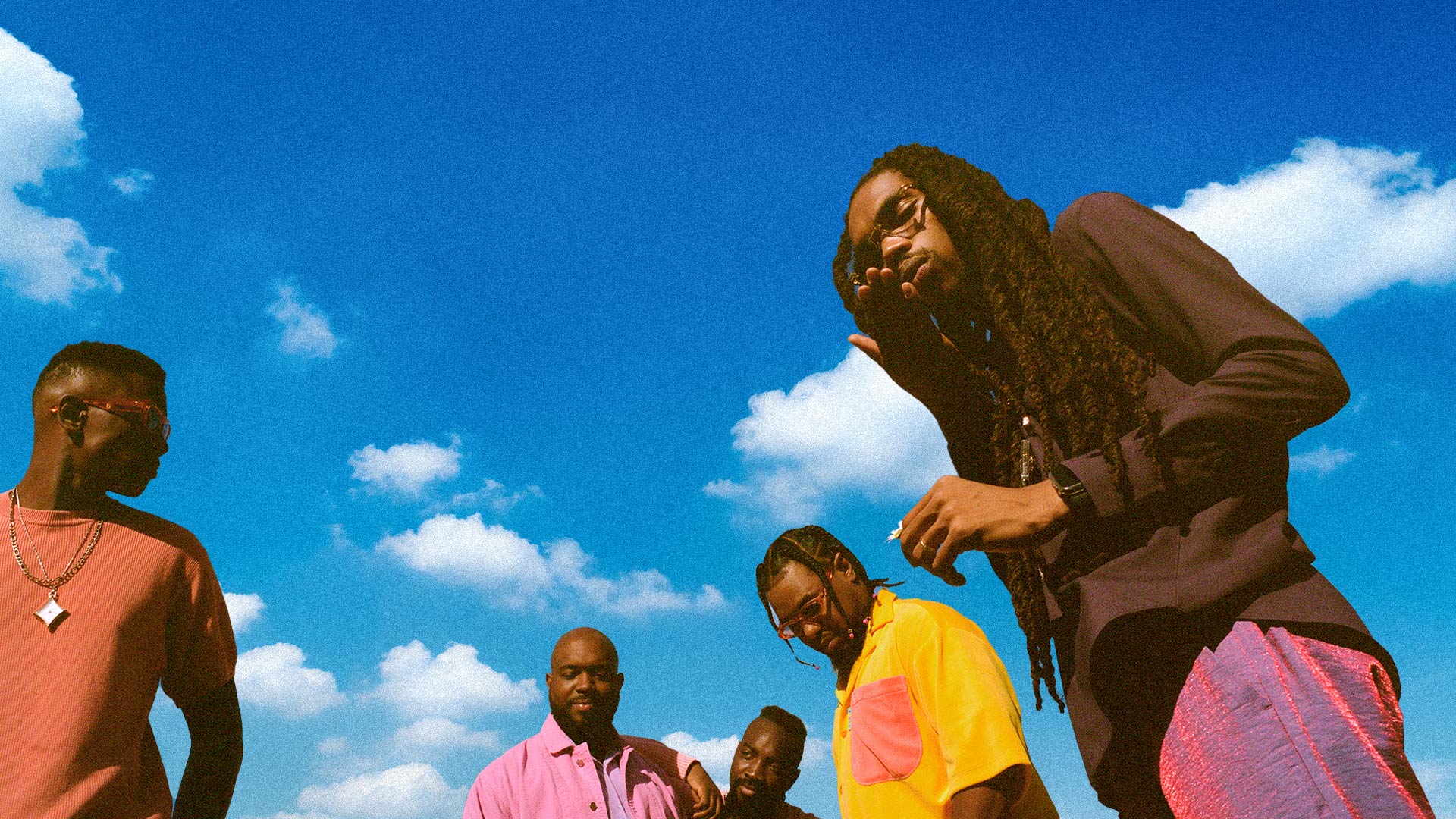 An artist’s greatest superpower is freedom. Liberation is both the modus operandi and main ingredient of the fearless five-man band Phony Ppl. Comprised of the cream of Brooklyn’s young musician crop, each classically trained member is a product of musical parents who gifted their children exceptional DNA, exposure to the greats, and most importantly, wings for exploration and self-discovery. The result is a collective that’s as limitless as its music; one that has received praise from the likes of Tyler The Creator and Childish Gambino, performed with Erykah Badu, Jill Scott and The Roots, and killed festivals, late night television and their own residency at New York City’s legendary Blue Note.

The warmth of lyrics are mainly credited to lead vocalist Elbee Thrie, a former Manhattan School of Music student whose vocals possess a disarming charm and lyrics glow by advanced perspective and retrospection. Trained composer, Aja Grant provides co-writing, the keys and much of the band’s arrangements. Strings are manned by guitarist Elijah Rawk and Bari Bass, PHONY PPL’s visual artist and bass player. The crew’s heartbeat is percussionist and former Music Conservatory student Mathew Byas (whose father is DJ Jazzy Jay of the legendary Zulu Nation).

After several jam sessions throughout high school, different iterations of the band, and honing in on their sonic cornucopia – the band has taken pride in their genre-less sound. Throughout the years, their music offerings have dabbled in experimental splashes of jazz, hip-hop, R&B, reggae, soul, rock and many more sub-genres. Their first official full-length offering Yesterday’s Tomorrow (2015) which houses discography gem “Why iii Love The Moon”, received critical acclaim from The New York Times, NPR, Rolling Stone and more. Their next album titled mō'zā-ik (Mozaik) would be released in 2019 via 300 Entertainment. The album earned its name because each of its songs is a singular piece of art possessing shapes and colors separate from the others, while adjoining to make symmetrical magic. Songs like “Way Too Far” and “Before You Get A Boyfriend” represent the dynamic nature of the album and solidify it as a body of work that transcends classification and time.

The band’s new album Euphonyus is set to release this fall. An interpolation of the band’s name and the word “euphonious”, the album’s namesake comes from the duality represented by their connection to the people (You – Phony – Us) and the most literal definition of the word “pleasing to the ear”. The band’s sonic approach to the album is to connect the dots between the different feelings each song provides; housing tracks that are danceable, vibrant, and joyful under the same roof as songs that are laced with sadness, sorrow, and lust. The long journey to Euphonyus started in 2019 when the band embarked on their headlining tour with sold out dates across the country. Things caught on fire in 2020 during their set on Megan Thee Stallion’s “NPR Tiny Desk” where the artists previewed their collaboration “Fkn Around” which ultimately went viral. Shortly after marked the onset of the COVID-19 pandemic, which delayed the band’s album plans but saw the release of “On My Shit” ft. Joey Bada$$. During that time, the band learned how to make music as a unit without being physically together, a skill that birthed their song “Nowhere But Up” which was made on Zoom through screen sharing. In 2021, as the world started to open back up, the band went on tour again setting the stage for 2022. While the album release took longer than expected due to the pandemic, over the last three years the band was able to record songs across the country and worldwide ranging from their individual homes in NYC to Los Angeles, Philly, Japan, and Germany; building and reinventing each track over time.

In the words of the band, Euphonyus encourages listeners “don’t think, just feel”. With the help of an eclectic roster of features from the likes of JoJo, Kaytranada, Leon Thomas, Domo Genesis, and more, Phony Ppl are ready to step into this new era.

Nowhere But Up (Official Video)
Fkn Around ft. Megan Thee Stallion [Official Video]
Before You Get A Boyfriend
directed by @YASHXANA A Pangean Vision @PangeanVision
Why iii Love The Moon
Way Too Far